Before I can dive into the greatness my recent trip to the DMV area was I have to reflect a bit on the absence of posts to ashleyraeturner.com. I like many “bloggers” have had more than one. I start with such gusto and then …. well things just happen. The Universe doesn’t care about my plans to more seriously food write. It laughs because I thought starting grad school (Go Boilermakers!), working full-time (with increased responsibilities and a raise to boot), moving to a new apartment (and moving my mom back home to Colorado) and saying yes to every “extracurricular” possible would still leave me time to write both here and in Omaha’s locally owned Black-paper.

Clearly I was incorrect, or at least incorrect for a few months. This post serves two purposes. The first of course is to take you on the food journey I attempt to have every time I travel, but the second is to remind me why I wanted this site in the first place. Why people ask me about places to eat or things to make. It reminds me that while I probably need to have a Year of No (I know this isn’t quite what you were thinking Shonda), I need to not say no to the things that fill my heart and that I’m truly gifted at. Now that sappy emotion time is over let’s get into it lol.

When a friend asked if I would be interested in going to a networking conference a few months ago I was at once curious (networking conference = sell me things I can’t afford) and totally with it (I love DC). A couple hundred dollars later (including a hefty bill to board my doggy baby) I was rushing to catch my Southwest flight (which ended up being the same one as my friends .. no we did not know that until I stepped on board .. a minute before the closed the doors). Quick #shoutout to Southwest because my boss flies them so much I can normally get a free drink coupon out of her, and two free checked bags comes in handy, and I don’t always care about having an assigned seat and they fly most places I want to go.

We touched down at DCA and after an interesting Uber ride, checked into the Gaylord National Resort on the National Harbor. This.Place.Is.HUGE. Our room overlooked the atrium that had four different restaurants, a lobby bar and tiny houses.  It was a bit overwhelming so after we checked into the conference we headed across the street to Public House for some food during their HH. Blame it on the jet lag or on being super hungry but I forgot to take pictures of my food ._. We both started with a half priced well (their bourbon well was Jim so I was satisfied) and I ordered the cheesesteak spring rolls and the chicken quesadilla. I didn’t love the spring roll due to the lack of cheesiness I expect with a cheesesteak but the quesadilla was quite good. I tasted a bit of Christen’s crab & artichoke dip which was pretty meh. The service wasn’t super great but we definitely noticed Public House was the place to be for the 21-30 crowd so we got some people watching in.

After a quick nap and homework break, we decided to venture back out and walked another block over to try The Tasting Room. Immediately we made a comparison to Brix in Omaha as they had little wine tasting machines. You load money onto a card and taste away. We tried a couple and then both got a glass of wine. I tried the Boxwood Rose which was very good and not too dry. They had a special of $10 off to go wines so we took a bottle back to the hotel and called it a night.

After a day of conference stuff, we needed a place to eat. After a bit of a run around part of our group ended up a Nando’s Peri Peri. This place was on my list of things to eat and our Uber driver the day before recommended it so we came in with high expectations.

I ordered the Chicken burger (hot) with chips and got their new blood orange lemonade. Literally everything was perfect. The chicken breast was juicy and the pineapple complemented the spiciness of the marinade. My lemonade was refreshing but I would have liked the “chips” to be a little crisper. My lunchmates all agreed we had made the right choice with Nando’s.

Later for dinner we stopped by Succotash, another restaurant I had researched beforehand. This may have been the place I was most excited to try because I love southern food and many places are doing great things with the southern/asian fusion concept. We started out with the Belle’s Punch, though we were hesitant to combine Vodka, Bourbon and Champagne. Our waiter assured us we wouldn’t die so we proceeded.

I wanted to try a little bit of everything so I ordered the crispy local blue catfish, bacon mac n cheese, cheddar bay biscuits and tried my friend’s crispy brussels sprouts. 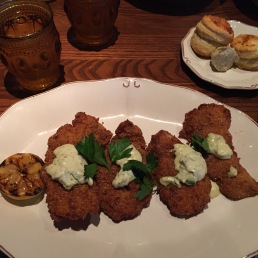 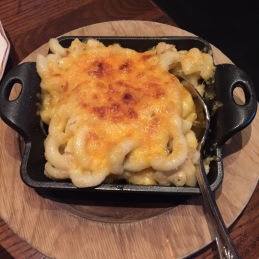 Catfish – I liked the mint aioli and the char on the lemon lent a bit of smokiness to it. The fish was fresh and crisp but I did have some pieces that seemed a little underdone (I saw some red).

Mac n cheese – overall I liked this dish. Once you got past the exterior though the actual bechamel sauce didn’t have a lot of cheese in it; but the dish wasn’t dry so I got over it.

Biscuits – So this may have been the most disappointing dish of the night. You could tell there was cheddar on the top of the biscuits, but cheese seemed to be missing in the interior. They weren’t super fluffy and crumbled a bit which isn’t the worst thing and the black pepper butter was a nice touch.
Brussels sprouts –  These were okay. I liked the char on them but wouldn’t eat the whole bowl. Will probably never get over my disdain for brussels sprouts.

C got the shrimp and grits which came with a fried egg. It had a brown gravy which she found a little weird but she enjoyed it overall.

We came back to Public House that night and were greeted by a slightly different scene. A live DJ played trap music and rap while people filtered in to get late night drinks. C ended up taking one for the team so our three or four drinks each were free on top of a tequila shot (which is something you can’t escape taking while with C).

Friday was a full day of conference stuff and a luncheon so outside of a quick stop at the outlet mall we stayed in the hotel. That night we decided to venture out into neighboring Old Town Alexandria to try Don Taco. Their Facebook page looked like what taco dreams are made of so we were both looking forward to the experience. We shared an order of white queso fundo and guacamole. I enjoyed the queso though I think more of melted stringy cheese when talking about fundo and not straight up queso. Would have loved some spice in this from peppers or even some chorizo. The guacamole was super fresh and a medium chunky consistency. 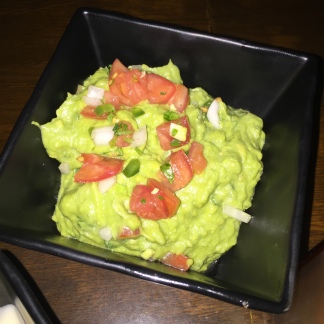 I started off with the Mexican mule which was delicious and made me forget I was drinking tequila (almost). The combination of the tequila, ginger, lime, bubbles and bitters created a good flavor profile.

I tried three tacos: California roll, surf and turf and pomegranate glazed skirt steak along with a chicken empanada.

The surf and turf and skirt steak tacos were PHENOMENAL. The steak on both was super tender and flavorful. I griped slightly that the surf and turf only had one shrimp but I loved the steak so whatevs.

The California roll, on the other hand, was not a winner. I blame this on myself for getting too adventurous in thinking sushi roll ingredients would be a taco I would like. The fish was fresh and it had avocado, but it was the blandest of the trio. Points for creativity but the execution was ehh.

The crust on the empanada was sufficiently flaky and crisp. The chicken was tender but there wasn’t a big kick of flavors that I was expecting for some reason. Still a super filling and worthwhile choice on their menu.

I also tried a Carlito’s Way (because how could I not, that movie is great) which had agave nectar and grapefruit bitters. Generally, I don’t like grapefruit drinks but I enjoyed the bitters in this and was very satisfied with the drink’s finish.

It was our last full day in the DMV with lots on the conference agenda. We grabbed a quick dinner at Crab Cake Cafe which is fast casual before going to the closing party. I ordered the Crab melt which came on an English muffin with melted cheddar. I asked for a side of their remoulade and ordered an Old Bay Cheddar Corn Muffin. My gosh was this crab cake tender and juicy with more meat than filler. The muffin was really good, despite the lack of cheese, which in this case was okay. 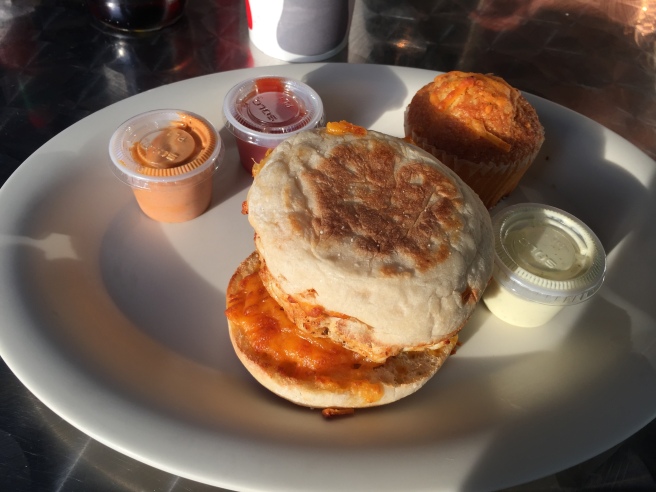 After the 30 or so minutes we spent at the closing “yacht” part we headed into D.C. to do U Street. We danced, we drank and we made some new friends. At the end of the night, I was hungry of course and the line for &pizza was too long so we headed to Ben’s Chili Bowl instead. I got a chili burger with a side of cheese fries I never finished. It was the perfect drunk food – greasy and cheesy. I wish there was an option for spicy chili but other than that this D.C. food institution is good in my book.

I had a couple of hours to spare before my flight left so I meet a friend in the Navy Yard at Scarlet Oak for brunch. Of course, I went with the bottomless mimosas; that’s what you do in D.C. before a 2-hour flight. I went with the fried chicken benedict with a side of fruit to prove I was a paragon of health and wellness. I was very excited that it was mostly strawberries and pineapples as I hate cantaloupe. 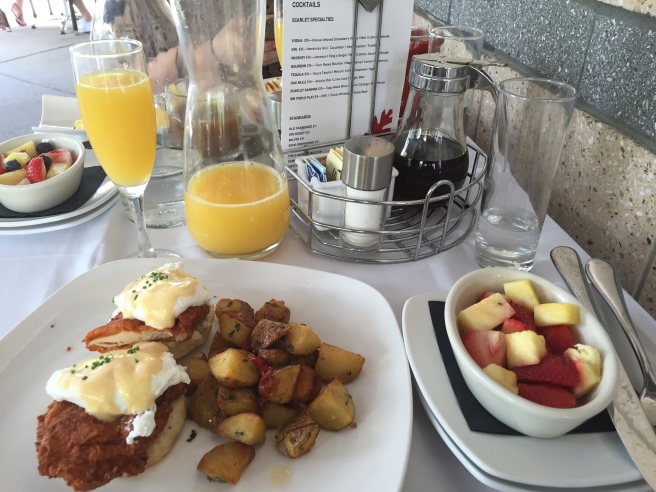 The roasted potatoes were done well but needed a bit of flavor so I asked for hot sauce. The fried chicken breast was great; juicy inside, crispy outside and the right thickness as to not be overwhelming to the English muffin. I would have liked them to have a spicy hollandaise with this but overall a tasty option for brunch.

As always I enjoyed everything I ate during my visit and have added probably four or five additional places to try out the next time I’m feeling a trip to the “East Coast” (let’s face it though, the DMV is basically also the south).